Ektar 100 in Canon 7 downtown, plus bonus

So that was a lot of film in a short time! I'd wanted to run some Ektar 100 through the Canon 7, and you'll see the downtown shots below. Then there was a roll of Fuji Superia 200 during the Ukrainian walk. About the same time a roll of Ektar 100 was in the GW690, then a roll of Kodak Gold 200.
So there's lots of film to look at, which sort of leads to the question, what's the story to go along with them? Which get shown, in what order, and with which other photos? Decisions, decisions. Some people might choose to present them in chronological order, but that's actually really tough, since the film cameras don't date time stamp the photos.
So I'll start with the downtown Ektar 100. This film loves light and colour, so that's what I was looking for. The walk started at The Camera Store to pick up some odds and ends.
1. The Husky towers, unless there's been some A&D activity and a new company has exerted their primal naming rights. 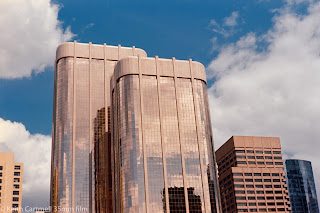 2. This mural looks a bit faded in real life, but the film seems to bring some new vibrancy to it. The problem with murals is that often they face a parking lot, or other obstructions. Some might choose to edit all that out and present an idealized view of the mural. I choose to accept that the obstructions are part of the mural. Call me lazy if you must. 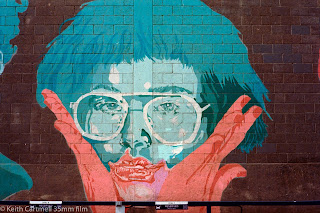 3. Part of the fun of using a rangefinder camera is not focussing before shooting. The idea is that you set a fairly closed f stop, and an acceptable shutter speed for the light and being hand held, then some markings on the lens will tell you the range of distances where everything is in focus. Aim at anything between those distances and you'll be good. People doing this get really good at estimating distances. I was doing a bit of his, and this is the best example. I was working on shooting some people on the ubiquitous scooters, when this rowdy pedal pub appeared from the other side of a big truck. Click. 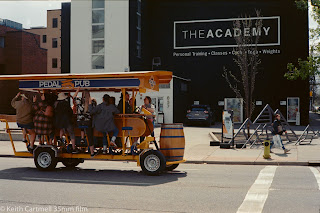 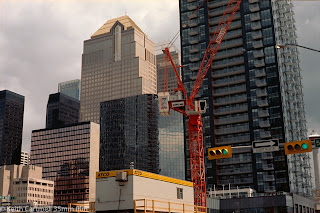 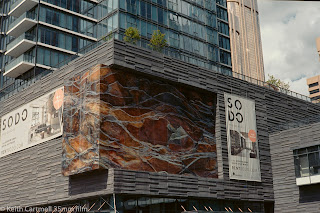 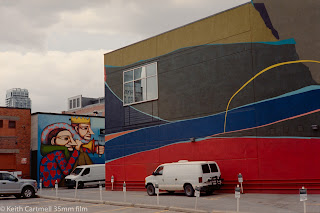 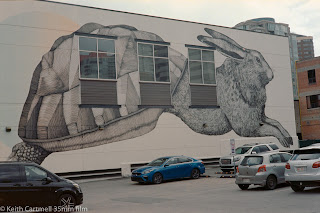 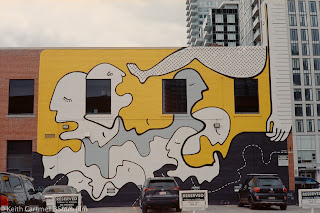 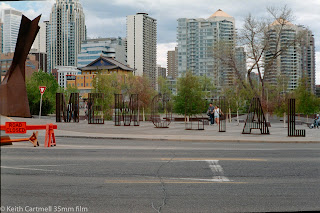 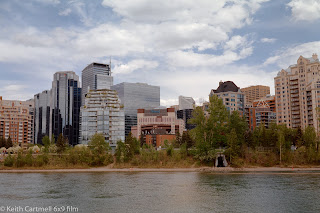 The other photos will appear here when I figure out a coherent story to go along with them. What do you have to look forward to? Flowers, landscapes, reflections, Ukrainians walking, Michelle, and Fish Creek. Some might appear in my other blog's 'Of the Day' section. Stay tuned!
at June 03, 2022