I'm starting to look at images shortly after selecting the November image of the month. I've got about 150 four star images to think about, and they're all good in one way or another. Some are better than others, or so I think, and then when I look at them later it's a different group that's better.

As long time readers know, Image of the Year is an opportunity for some major league dithering. Five of the image of the month winners are in the running for the big prize. Like a door prize, all the tickets go back in the hat.
Dec 6 (more)
The plan is to work with the images, sit with them a bit as a group and individually, and think about them, which is best and why. This usually involves a review of my star ratings.
Christmas I'm down to 18, pondering. A lot.
Jan 1, shortly after posting December Image of the Month. Still at 18, because it's going to actively hurt to take any of them out of the running. Here's the finalists. 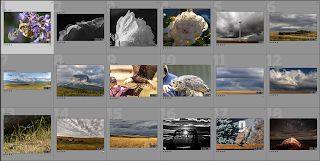 I just counted, 2/3 of them were taken on Neil field trips. Which seems to prove the rule that if you want more interesting photos, you go stand in the way of interesting. Of the other 6, 5 were in the garden or near the house, and the dragonfly was in Fish Creek. No trip to New Zealand, or anywhere else for that matter.
A little while ago I was reading a photographer who talked about the value of printing your work. How it was a different experience holding a piece of paper (or canvas, or many other materials) and looking at an image, as opposed to seeing on screen. One of my buddies has had difficulties in printing books because the image looks different on paper.
I've printed several images (Image 2017, Nov 2016, and all three in March 2017) plus number 18 above was printed for the Christmas exchange, and I was pleased to see Sean end up with it. I can't wait to see it on paper. My thinking was that I'd print a few but display most of them on screen using an old computer. That part didn't work out as well as I had hoped, and I'm now going back to the idea of printing some shots. It seems to me that finalists for the Image of the Year would be good candidates for printing. There's lots of wall space, right? Except I need to get more of the cool hanging mechanism, where there's a track along the top of the wall, and clear hangers to hook the photo frames to.
Jan 3, I think I'm down to 4. Two for sure, and then I have to decide between a pair of images that give me a similar vibe. At least I think so.
Sean has talked about photos that have heart. I'm not entirely sure what he means, since there are a number of possible meanings. In any case, it seems to be a good thing, and he has mentioned that some of my photos have it. As it turns out, Sean and I did a walk along the Bow River on the weekend, and that involved visiting his place to look at the steel wool print. I'm quite pleased with it.
As it turns out, the version that was printed is not quite the same as the version under consideration. The printed version had to be cropped to fit a predetermined size, which did not include the native size. There are some subtle differences between the print and the display version. He asked me to sign it, which is always nice.
I'm thinking that heart means a photo should evoke an emotional response of some kind. That's kind of tricky for the photographer, since they were there, and can place the image in the context of the surroundings, who was with you, how you were feeling at the time, and everything else. All a viewer gets is the image itself.
Several of the flower shots from this year made the cut to the finalists, but none of the bright colour ones. Many people think of a photo with more colour as "better", and it's certainly one way to catch the attention of a viewer. But I'm trying to get beyond the quick like on Instagram photos. I'm trying to get to photos that people will want to return to, and take some time with, as opposed to the near infinity of other photos out there and all the distractions the world has to offer.
I continue to return to the question, what is best? How to get better photographs? I can't stand it when people say a photographer got lucky for a shot. Odds are they put work into being in the right place at the right time, with the right equipment, and if outdoors, hoping the light and everything else works out. I've been part of a group to get ho-hum photos while someone else in the group got THE shot. They knew how to take advantage. They knew how to set the camera to get the shot, with no futzing about while the moment disappears. Sometimes it's being patient, waiting for a cloud to move. Sometimes it's looking in the right direction.
Part of it is being able to recognize the raw materials in the wild for a good photo, and knowing how to work with it to get what you want. Perhaps it's getting into a particular vantage point (inches matter sometimes), or getting the sun in exactly the right spot, or using specific camera settings, or tweaking the scene to remove distractions. Knowing to put a model exactly there, as opposed to nearby locations. Realizing a scene might be far better in the fall instead of the spring, and remembering to come back.
So after much dithering and considering, I'm down to my final three. For the curious, choosing between number 11 above, and the second runner up below was the tough decision. I considered giving 11 an honourable mention, and I guess this is a way of giving it a semi-honourable mention. There's lots going on in the photo, as I noted in the August image of the month blog. Maybe if I'd been a little closer, so the train was bigger, and there wasn't as much empty field...
Second Runner Up
Taken during a Zeller tour of the Foothills. Those that saw the photos on the blog at the time know we had terrific light all day. I fell in love with this landscape as soon as I saw it. It reminds me a bit of Tombstone Park in Yukon. The light on the field, the shadows, the farm building that is almost completely hidden, the cows and hay bales, so much detail to look at! This panorama would print out about 3 feet wide in exquisite detail. I think I would do it on canvas. 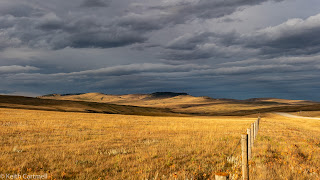 First Runner Up
I just love shooting bees. They're so beautiful, so detailed, and so hard to capture. A bee just hanging there wouldn't have done it, but the light on the moving wing was perfect. I wish I could say I sweet talked the bee into posing, and got the settings just right, but it was much too busy to listen to me. Some people might be interested in knowing this photo captures 1/640 of a second. 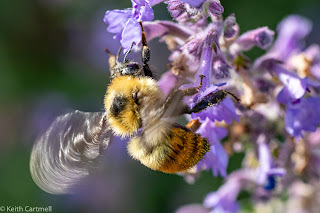 Image of 2021
Another Zeller night sky tour. It was a windy night so I spent part of the night in the lee of a building shooting southward. A little later the skies cleared a bit and we moved into the next clearing to shoot SW towards the galactic core until the clouds rolled in again. Then as a reward, Neil went out onto the little spit of land into Clear Lake, and spun some burning steel wool.
Everybody else got close, and you can see them lined up. I think for most of the people it was the first time they had seen this sort of thing. I chose to stay behind the group, with two cameras running. One with a wide lens and one with a long lens for the closeup. This is one occasion where I saw the shot before I took it, and it worked out. In hindsight I could have been a little closer, but I'm thrilled about getting everything right. 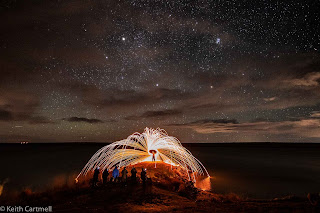