The big day finally arrived! I dropped off the rolls of film (Portra 160) to Paul Stack on Tuesday. On Thursday I got an email saying they were ready to be picked up, and I did so on Friday. I had tried to shoot the film at box speed, at close to the indicated exposure, and didn't give any special instructions about developing. If you've been following along, you know I had some adventures with the camera, see here. That explains why there's only 6 images instead of 16.
I chose to do DSLR scanning using a Canon 6D mk ii, with the Canon L f2.8 100 mm macro lens. The settings are ISO 400, f3.2 and exposure varied between 1/60 and 1/125. For this first time I mounted the camera underneath the tripod, with the light pad on the floor. Not the most convenient setup, but this is a bit of an experiment with the whole process. (If I'd had my wits about me I'd have taken a photo of the setup. Maybe next time. I was eager to see the scans.) I think what I'd like to do is create a permanent setup where I can clip the camera in, turn on the light pad, tweak the camera settings, and start shooting. However I'm not sure what that looks like just now.
Overall I'm pretty pleased. There were a bunch of firsts here:
-First time shooting a medium format camera.
-First time shooting a rangefinder focussing system.
-First time using a light meter (the iPhone app myLightMeter).
-First time scanning the negative with a DSLR.
-First time running the Negative Lab Pro software, which is pretty easy, and offers lots of choices for editing. Some are similar to Lightroom, some are not. I'm going to have to work with these a bit to see what works best for workflow. It's really easy to push the sliders and have have things look weird.
These photos are cropped and rotated to be square. They are lightly edited in Negative Lab Pro, and a few more tweaks in Lightroom. The first couple might be a bit dark.
Without further ado, here's the photos. 1 and 2 are Bebo Grove, and the rest are Shannon Terrace in Fish Creek.
1. 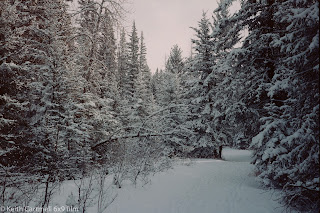 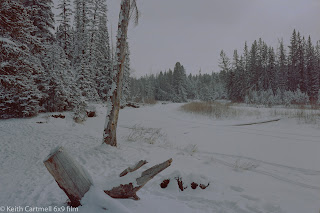 3. This is actually the first shot I took. The blue car pops out nicely. 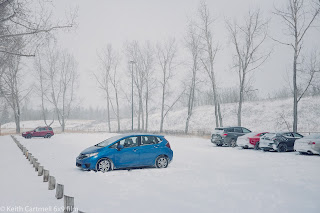 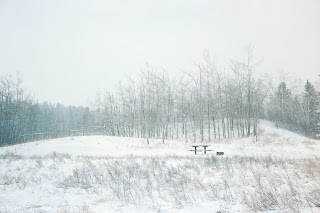 5. Bridge 2 is my favourite, but I wasn't going to walk on what might or might not be solid ice to get the nice shot looking up river. 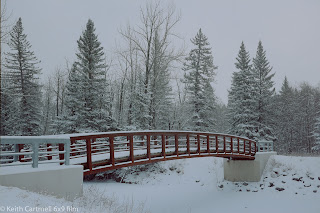 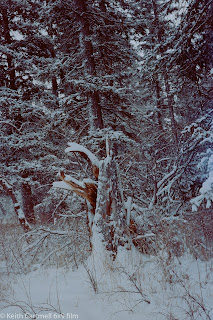 My thoughts.
I can say without hesitation they look different than digital photos, though I don't think I could describe how or why. The only one I don't actually like is the last one, the stump. I was feeling a bit rushed on that shot for no reason I can articulate, and I think it shows.
Even though the camera problems were frustrating, I kept in mind that it was a 40 year old device, and who knows when it was last shot. It could have been sitting on a shelf feeling unloved for a decade or more. The borrowed GL690 is a sweet shoot, though it doesn't feel as comfortable in my hands. I can't wait to have the GW back.
Editing for digital photos is mostly a no brainer now. My camera is set up to produce the images a certain way, I typically expose shots in a similar way, and it leads to doing similar things in Lightroom. Things are different working from a medium format negative. I emphatically do NOT want to edit them to look like they were shot digitally! So this is going to be a work in progress. I'll probably take some time and bang the sliders around on a virtual copy, just to see what they do.
One thing was right in my face. Dust spots. They aren't on the negative. I removed a bunch, and there's probably more. When I looked later the camera lens was filthy.
Something to try. Set up the camera so it shoots the the negative in portrait mode, and take 3 or 4 shots to create a panorama of one negative. Done right, this ought to bring up more detail.
My learnings, so far:
-Go through things methodically, step by step.
-Think about composition.
-Double check the light.
-Make sure the lens cap is off. (I didn't goof on that, but I'm told it's just a matter of time with a rangefinder.
-Take the time to get the settings and focus right.
-Clean the camera lens!
-Check for dust on the sensor and negatives and light pad.
-The camera needs to be a little closer to the negative, and block out more of the extraneous light.
There is a roll of B&W being developed, stay tuned.
If you want to follow along on my film adventure, send a request through email (look in the profile page), or on a comment here (hint, blogger hates mobile devices and nothing I can do about it), or via Facebook or Instagram. Or if you know my cell you could send a text. I'll add you to a mailing list that will get sent out when I post here. People who subscribe like this sometimes get extra goodies!
at February 25, 2022 1 comment:

If you've been following along on my personal blog (here, specifically for the start of the medium format story) you know that I recently purchased a Fujica GW690, and have been shooting some 35mm film on some borrowed cameras.
I think what I'm going to do is migrate the whole film thing to this blog, and talk about it in a bit more detail. It might be a mix of 35mm and medium format, but I'll label things for you. Once I get a bit of a library of medium format shots I like, I'll probably add another section to my portfolio site for them.
It was cold and snowing again last Thursday but around noon it looked like things were breaking up. I loaded some Portra 160, used sunny 16 (with a light meter check) to set the camera at f16 and 1/125. Technically it should be 1/160, but the camera doesn't offer that choice, and I chose to overexpose a little by selecting a slightly slower shutter. I'm still getting used to the light meter, and it was suggesting 1/250. Onwards.
Fish Creek is my favourite place to go if I don't have a specific location in mind. It's beautiful any time of day, any time of year. The point was to get some snowy shots with dark trees for contrast, and maybe some of the cloud definition.
All went well till shot 5. I was enjoying the process, the camera felt great in my hands. There was still some light snow so I was tucking the camera into my parka between shots. That didn't go so well. I think next time I'll try to keep it in a plastic bag between shots. I'm pretty sure that weather sealing wasn't really a thing when it was manufactured.
When I got to shot 5 I found the film advance lever wouldn't move, and I couldn't click the shutter. After a bit of jiggling I got it to go and did another shot, then got the same problem. I ended up going home again, and taking the film out in a dark room. Once the film was out, the advance worked fine. Which it had before I put the film in. I found out later I might not have advanced the lever fully during the first stroke.
So I put the next roll of film in, and headed down to Fish Creek again. This time things froze up/jammed on the second shot. I cheated by cracking the back open, briefly, and going through a routine of taking a shot and jamming again. Once home I pulled out that roll, and did some test firing. To say the shutter was erratic is an understatement, though it sounded normal otherwise.
Dave from Film Experience asked me to bring it back, and he'll send it off for CLA, that is, Clean, Lubricate, Adjust. It's been a while since that camera was shot, so things may have set in place, or lubricant is gucked up, or something not quite right. He wasn't sure how long the process will take, and it could be much longer if it actually needs parts. Though I did see one of these on eBay to be sold for parts... Such are the trials of shooting a 40 year old camera.
In the meantime I have a very similar loaner camera, a GL690. It doesn't feel as good in my hands, but I ran a roll of B&W through on the way home from the store. Still getting used to setting exposure using a light meter. Using the range finder is easy, though I have to remember to actually focus.
Both rolls are off to be developed, with a note saying there might not be any images at all, or overlapping images. When I pick them up, I'll drop off the roll of B&W. Then I can do a trial run through the process of DSLR scanning, and negative to positive adjustments in Lightroom. I'll blog again when I have photos to show you. After reading about a sharp lens and a 6x9cm negative, I can't wait! Stay tuned.
Right now I have one blog notification mailing list, and I send it out when either blog gets updated. If you'd like to be notified when I update just this one, because you're interested in the film experience, and not my personal blithering let me know with a note to keith at nucleus dot com and I'll create a second list.
at February 23, 2022 No comments: