In early September I was in Yukon with some friends for 10 days. Late September I got the film back from the lab and posted some Tombstone landscapes. While walking around Dawson City I captured some of the buildings that caught my eye. These were captured on a Fujica GW690 using Kodak Gold 200 film.
Digital photos exist for some of these, but you won't find them side by each. The intent was not to create images for easy comparison. I don't have the technical skills or the desire to do the documentation for a rigorous comparison, and there is no real reason to do so. The main intent was to wander the town during some quiet time before lunch, and capture images of the buildings that interested me for whatever reason.
In a few cases I was using the camera as a sophisticated light meter, since the light was flat and kind of tricky. In some cases there are digital photos but not film, or film but not digital. Why would I do that? Good question. (Look! Over there, a polar bear!)
1. In three visits to Dawson City, I have not been inside this building. I'm told the show is excellent. But most evenings I was in one of two states. One, heading out to try to capture aurora skies. Or two, collapsed in a heap in bed. 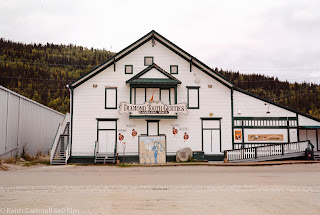 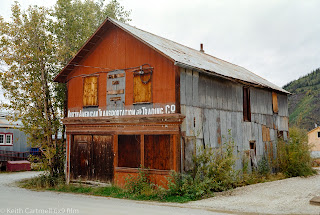 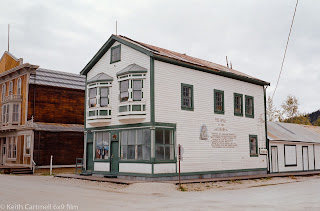 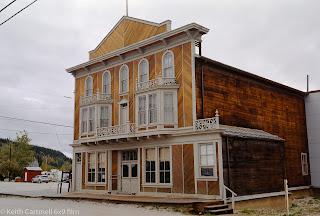 5. The ferry across the Yukon river. Back and forth all day. This is not a cable ferry, the pilot has to actually account for the fast current, and then run aground just right. Hard enough to anchor the ferry so people can drive off and on, yet not so hard as to damage the ferry or make it impossible to get off again. Every trip is a bit different.
The astute of you are asking yourselves, "what do they do in the winter?" The ferry is retired for the season and they build an ice bridge. Yes, life gets tricky during the transition seasons. I'm told it's $400 for about a 1 minute helicopter ride across the river. Maybe ok if you are suffering severe medical distress, but you'd hate to do that because you planned badly and are running out of groceries.
I was sitting, waiting for the ferry to be in just the right spot for this photo. 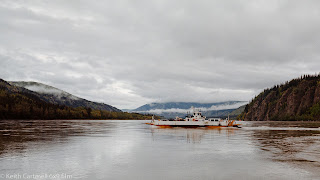 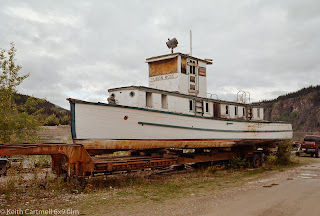 7. The Kissing Sisters. These are a pair of famous buildings, built before people fully understood how to build on permafrost. This is why there are abandoned buildings in Dawson. 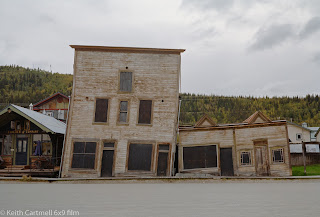 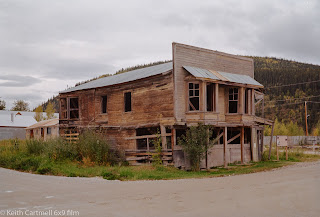 9. No, that's not an artifact of holding the camera at a funny angle. The building really is tipped over. 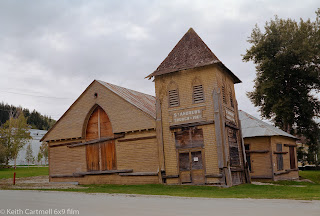 10. This one and the next one are just beside each other, and do not appear to be falling down, so I'm not sure why they've been abandoned. There is a housing shortage there, so I'm a bit surprised they haven't been renovated. Then again, the costs for doing so could be far more than any possible return. 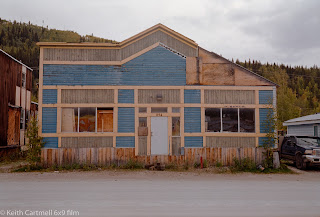 11. I was wondering what this building used to be. It has a vaguely 60's federal look to it. 12. The school and library is such a cheerful building. I don't think it's new, I think they've dressed up an older building. 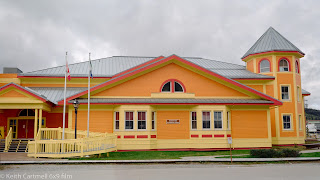 13. One of the hotels. Our group stayed there on the last trip. 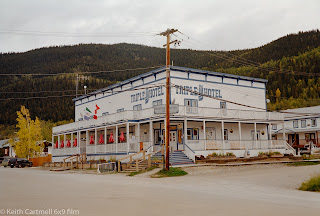 I missed one of the more famous buildings downtown, the one that used to be a bank. I do have a photo of it in digital, and it will appear on my other blog site, probably tomorrow. Every time I was near it with the film camera, there were obstructing vehicles ruining the photo. There are some Dawson photos that will show up as well, because, why not.
at October 15, 2022 1 comment: