In a sense, I've been working on this all year, but in the actual writing sense this has started on Solstice. Getting the draft started, and going through all the images to review the star selection. While I'm doing that, you might want to review the image of 2017 and image of 2018 posts. I'll try not to repeat myself.

This was a huge year in terms of photographic output. HUGE! I'm past 50,000 photos and not done the year yet, as of this writing. Of course, 2 months in New Zealand, and 10 days in Yukon might have something to do with that. Lots of star shots in those, which don't get edited in the same sense that the photos you usually see on the blog.

On the edited front, as near as I can tell, about 3600 were done for me, and a further 2000 or so were done for the Community association, and I'm not even sure how many for other client shoots. There are additional ones edited for specific purposes that I'm not counting here, like those for a time lapse, or one particular client shoot. Let's just say I'm not entirely consistent in my Lightroom use.

Right now there are 217 with 4 stars, and 25 with 5 stars. These 242 will be the pool for choosing image of the year. After all, on further consideration, some of the star ratings change. And I could get the shot of the year over the next few days. No, I'm not going to treat the 12 images of the month as the finalists. It's like drawing for the big door prize, all the tickets that won a minor prize go back in the hat.

As in previous years, there was much temptation to choose best within categories, but no, that way madness lies. So many categories are possible, and some overlap. Winner, a couple of runner up, maybe an honourable mention, that's it. There can only be one.

Last year there was a big image showing some of the finalists, so I'll do that again. Hang tough. I'm going away for a while. Don't hold your breath. I got down to 13 and dithering. Then my famous buddy Neil suggested I not wait, and post the photos I like best on his Facebook workshop page, as several others had done. I did the 13 and got some nice comments, thank you. Even now the likes are still coming in.

But 13 is a weird number to screen shot nicely, so I dropped the weakest one, and you get 12. 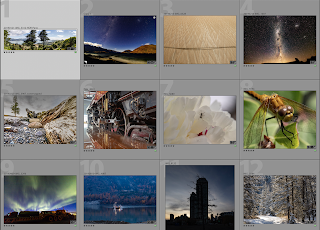 And now I dither more. Longer. Harder. I think I've got two of the finalists picked out, at least based on one theory of best photograph. If you've read about the previous years image winners, you'll know I have several theories about best.

Which one took the most work? Probably 2 and 5. For 2 I was up I the middle of the night, walked 100 m to the beach, then worked to find a place where the camera was out of the light of the moon, and out of the really strong wind. It took me a long time to get the camera set up for these shots. Finding level with all the conflicting lines seemed to be really hard at the time, to say nothing of all the technical camera stuff. With 5, it took two separate trips to the log, using a bunch of different lenses trying to get the effect I wanted. It was probably the most technically demanding shot of the bunch, with everything having to be just so.

The easiest? Number 4 was one of many of the camera doing its thing, though the editing was tricky. Number 6 was one improvised shot as we were about to leave. Number 9 was one of many. 10 I hopped out of the van, took two shots of the ferry, and hopped back in the van again. If you think of number of shots taken vs used, then 8 wins. I had hundreds of shots chasing dragonflies that day, with only a few to show for it. But so much fun!

In the end, photography is all about the light, and the skill of the photographer in catching it. When I look at these photos and think of where I've captured extraordinary light, the answer becomes clear. Now, which order? Hmmm.

2nd Runner Up
This one has been growing on me ever since I took it. I keep coming back to the smoky twilight, the reflections of the trees and ferry in the calm water, and the textures in the mountain side. Dawson City ferry. 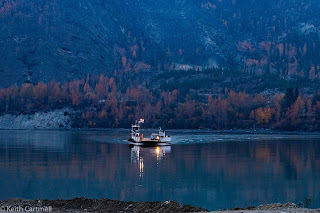 1st Runner Up
This was image of the month for November. Fish Creek Provincial Park.

And the 2019 Image of the Year!
The view from the gazebo at Larnach Castle, New Zealand. I, and other people think it looks a bit like a painting because of the particular quality of the light.
(This was not assembled until after I got home, so it wasn't in the running for January image of the month. It's 11023 x 3149 px, or about 3 feet by 10 inches for a high quality print.)