My normal photo process is to take the camera with a particular lens and go for a walk. Sometimes I have a specific thing in mind, and I'll take the appropriate lens. Sometimes I'm just out to see what I can find and have occasionally found I'm carrying the wrong lens.
Of the few that I actually select to be edited, almost all get global edits and light tweaking and are called done. A very few get special treatment. Some of the edited photos see the light of day via my blog or social media, or get shown to a client. Some never actually get seen by anyone else, but I'm still pleased by them. I'm trying not think about the tree falling in the forest not making any noise conundrum, like, if a photo is never seen does it actually exist?
But some photographers see an image in their head, and work to create it. That might involve a model or models, make up, a set, lighting, props that could range from a pair of shoes to an expensive car, smoke or fog machines, or whatever else might be necessary to get that image. Some shoot an image, or part of it, knowing they can drop it into Photoshop and create the rest of the image there.
I've got two projects in mind. Each involves a specific portrait idea, and I'm busy rounding up models. A few people might show up in both, but I'm thinking that isn't going to happen much. The plan is to produce two books, one for each project. I'm fine tuning some of the details to make it more than a selection of photographs. I'm hoping that each project will produce photos that tell a story in themselves, and maybe on the facing page the model will add some text. Like I say, still working on the details.
Generally my thinking when doing something new is the best way to learn is by doing it. This has sometimes led me to think, in the middle of the project, "crap I wish I'd thought of that situation, now I have to redo some stuff." So I'm trying to think this one through first.
That bit was written a little while ago, and now I've got some models interested in more details, and a few have signed up. They're thinking about prop details for what I'm calling The Handy Book, and we'll get a date organized. I've done the formal first shot of what I'm calling The 50 Book. 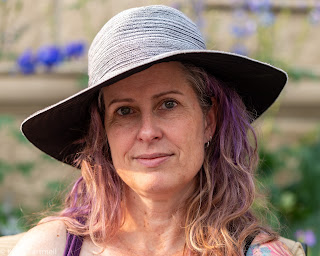 Regular readers will know this is the famous Michelle. I'm so pleased with this photo, and it's a great kick off to the next phase of the project.
There isn't a really good shot of the other project that I can use here. It's a permissions thing, not a photo thing. The next actual task is to draft up a model release.
There are other projects. I've 3 more dates for a theatre company to shoot a kid's circus camp. This is amazing fun! I'm getting a zillion photos out of each day so far.  Some of the kids are amazingly photogenic, amazingly talented, and are naturals in front of the camera. The photos almost take themselves. The hard thing is the selection process. I was happily surprised by one young woman who looked familiar. I asked if I'd seen her at a particular camp a few years ago, and yes! She had been wondering the same thing, if I was the photographer.
You know how on IMDB you'll sometimes see a particular actor listed as participating in 'an unnamed project'? One of my buddies and I have loosely discussed a collaborative project. We know it's called 'Defect 29', but we know very little else about it. This might be a longer term work in progress.
There are the community association events. It's only taken several years, but people are getting used to seeing me and my camera. A few people have asked about family portraits, or other group shots. In a couple weeks I'll be giving the senior's group a presentation of my New Zealand photos. There's more than 15,000 to choose from, so, speaking of a selection process...
Plus, as I alluded at the start of this post, my own photos. Some of you might know I recently spent some time in Fish Creek chasing dragonflies. They photograph easily and beautifully if you catch them relaxing on some object, especially if it's in contrast to their wings. Catching them in flight is a major challenge. This one might be old in dragonfly terms, given the ragged wings. 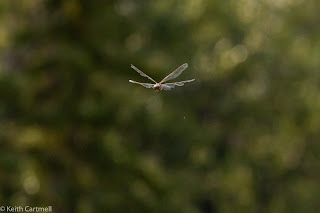 And Linda's garden. I'm out almost every day as new flowers bloom, or they catch the light in a new way. Here are the newest lilies. 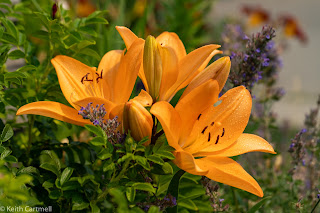 Lastly, this photoblog is updated only periodically, while the personal blog is updated every other day or so. If you're already signed up to get my blog notification emails, you'll know when this one updates. If you'd like to be notified when either of my blogs are updated, send an email to keith at nucleus dot com and I'll add you to the list. Subscribers sometimes get extra tidbits in the email.
at August 01, 2021 No comments: