Those who have been following along know that a few months ago I picked up a Fujica GW690 film camera, and have been out with it several times. The most recent trip was Lesueur ridge walk. Those shots are part way through the roll. I'm hoping to finish the roll this weekend and see what I got. This is a rangefinder style, which I find is fun to use, though I'm still coming to trust the distance scales on the lens.
But I'd been thinking that a similar style camera for 35 mm film would be fun, and easier to deal with in an urban setting, or under less composed circumstances. Plus, it's easier to experiment with a film or exposure technique when there's 36 shots, rather than 8.
The most well known choice is a Leica. Even non-photographers know the name. Most photographers know that some of the most famous photographers used them. They are considered to be some of the most desirable cameras to own and use because of their superb build quality. Many people think they are the most perfect camera of that style yet produced, and are often the standard by which others are measured.
The only problem is that they are expensive. Really expensive. Now, I'm a firm believer in the idea that you often get what you pay for, and that buying cheap is a false economy. But this is over the top. I have held in my hands a Leica about my age old, and could have bought it. (Let's not say too loud it looks much better than me, with far less wear and tear.) The body and a good lens were north of $5000. Yes, 3 zeros.
I continued my research, and came up with the Canon P and Canon 7. They're of a similar vintage and considered excellent quality. There were others on the list as well. So during the most recent trip to the store in Longview with the Leica I asked if he ever came across either of those two in his travels. As it turns out he had two Canon 7 cameras in stock. The camera, a lens, some film, and some other odds and ends was less than $1000. (As a side note, if you know that store, and are burning to buy a Leica, be advised he knows perfectly well what he has there, and doesn't haggle.)
Now imagine putting the same kind of film into the 7 and that Leica, and carefully taking the same shot with each. Same settings and everything. Develop the films in the same batch of fluids. Scan or print them as identically as possible. Even experienced photographers would have trouble identifying which image was shot by which camera. Which is another illustration of why the photographer is the important part of the image taking equation, not the camera.
When I got home I told Linda I had saved more than $4000, and if I did this every day, I'd make far more than when I was working. Except, as she gently reminded me, it doesn't work like that. Sigh. For the photographers out there, the lens is a Canon 50 mm f1.4. Please don't drool on it.
Here's both cameras posed on a pile of film, the Canon 7 on the left. 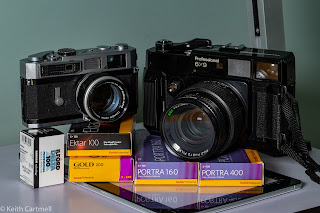 I started off with some Visions3 50D cinema film wound into a 35mm canister. This is a film that loves colour, so I loaded some up on a sunny day and went looking. I was trying to be careful of the settings (pretty much dead on what the light meter and sunny 16 advised) and how the camera felt in my hands. Overall I was astonished at how vivid the colours are! Tweaking the white balance was a bit tricky, but these are shot with a DSLR, and run through NegativeLabPro with pretty much the default settings.
Here's some of the photos.
1. Those yellows! 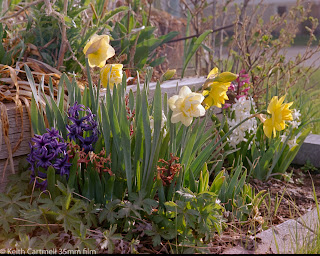 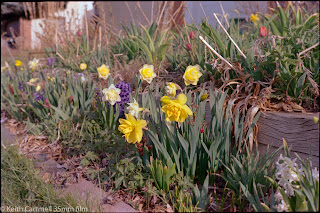 3. For me, one of the tests of how a photo looks is how it handles green. We all know what grass, and plants, and trees look like. Pushing the settings to get an 'artistic' effect can sometimes drive those greens into looking strange. Do these look strange to you? I thought not. 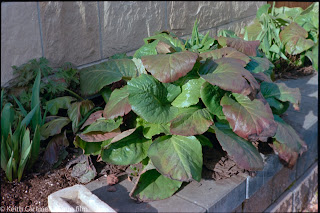 4. The chairs, blue vases, and the stone wall look like this in life under strong sunlight. 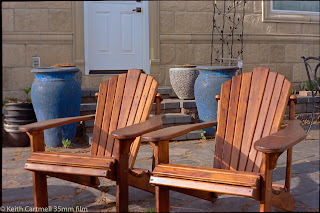 5. I've never really liked digital reds, but I swooned when I saw this garden decoration. That is exactly what colour it is. I can't wait for the red peony to bloom. 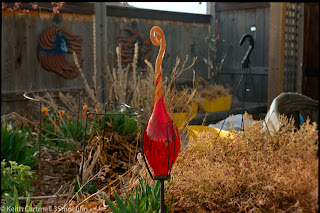 6. An attempt to produce art out of shipping containers, but the colours are very true to life. 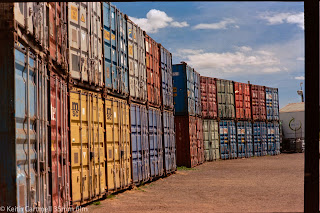 7. More industrial colour. I think it's been a while since it was painted. Or cleaned. 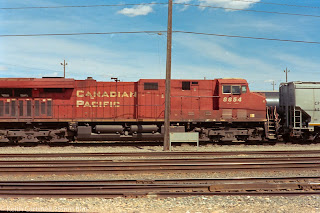 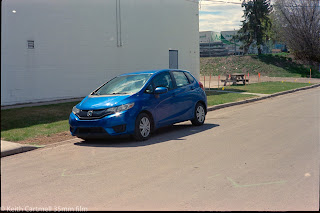 9. The graffiti  really pops, although remember the orange. 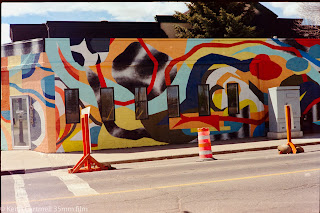 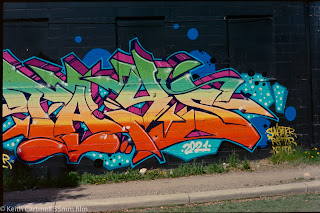 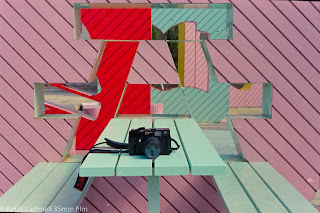 12. My one downcheck. Remember the orange above? I remember these scooters being a similar orange. Yet they come out as a peculiar red orange, and nothing I did would change that. 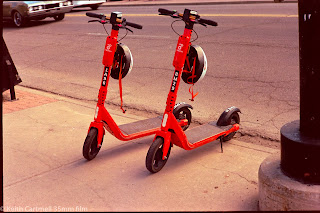 Am I going to get more of this? Maybe. I love the colour, but I'm still getting a grip on what Ektar 100 looks like, and I want to shoot some of the new Kodak Gold, and I just picked up some Fujifilm Superia 200. The downside of the cinema film is that it takes a specialty developer process, ECN-2, and my lab has a two roll minimum for it.
At the moment I've got Ektar 100 loaded in both cameras, so I'll probably take them both out and try to do at least one photo of the same scene, using equivalent settings.
Am I loving the Canon 7? Yes. More than the GW690? Not more. I'm thinking they'll be used for different kinds of photography.
at May 23, 2022