There I was, drying the breakfast dishes (typically 2 each of mugs, bowls, spoons, knives, plus the French press for coffee) when I looked out the front. I didn't quite run for the camera, but did stop drying.
I was loving how the light was playing on the snow across the road. Snow is a difficult thing. We know it's white as white can be, at least until the city starts spreading sand on the roads, or it melts into the mud. Even shadows on snow, we see as a white tending towards grey because we know the snow is white. However the camera often sees it as blue, which can look sort of weird.
Trying to correct it can get tricky, but I wasn't so fussed about that this time. I was after the textures of the snow and the interplay of light on them. It looked like the wind had blown the snow smooth, then deposited little ice crystals on top. Some of them were doing the rainbow thing. Then there were the footprints and blocks of snow, and the gentle curves. I was loving moving back and forth trying to capture what I was seeing. 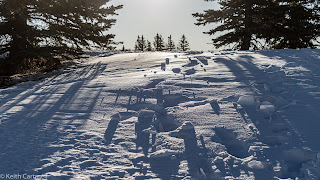 The other day we were out for a walk, looking at the texture of snow along the berm. It was looking almost scaly, and glinting nicely in the light. I didn't have the camera with me though, so I wasn't tempted to stop our walk and try to capture it. Just as well, since I was pretty dubious that it would work the way I was seeing it.
I've been by this log several times, but don't think I've ever got a photo I liked out of it. But on photo day the light was nice, and there was some snow adding interest to the shot. The snow helps give some depth and adds interesting shadows. Of course, the very moment I'm about to take the shot, an absolute herd of cyclists zoom past. I'm just glad they didn't disturb the snow. And yes, this is a pareidolia photo.

Of the Day
Driftwood
Sometimes the sand can look like snow, and behave a little bit like it, particularly with the help of the wind. As I look at this one now, I'm wondering if I should have cropped it 16x9 to get rid of the top bit. 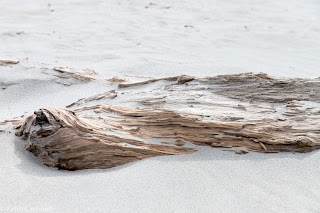 And since I was thinking of it, why not? What do you think? 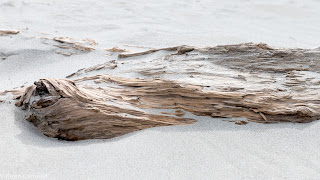