I've been looking at the year's photographic output for several weeks now, thinking about star ratings, and which images I might want to re-edit.
2020 was a slow photographic year, by my standards. only 18145 images taken, and that includes a month in New Zealand wandering many beaches. However, it does not include any number of races, community association events, and private client shoots that were cancelled. We all know why, so no need to get into that.
Of that, I ended up with:
3521 (19.4%) 3 star or edited images. (Note there are another 400 some community association images, even with the cancelled events. I use a different rating system for them.)
322 (1.77%) 4 star images. These are striking in some way, better than most, but aren't quite 5 stars. These are my prime hunting ground for re-editing with new tools. Perhaps I can fix some flaws and promote them.
50 (0.27%) 5 star images. These make me perk up and say "Wow!" for one reason or another.
It's all terribly subjective. There's times I wonder why I didn't give something a higher rating, or wonder why I gave one such a high rating. There's times I've gone back and forth. Even now, I look at some of the 3 star and wonder if I should nudge them up. There's times I wish there was a 3.5 star rating.
So here's the 50 choices. 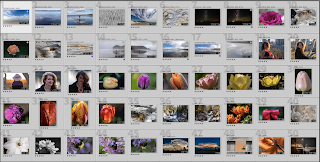 Decisions, decisions. I continue to think that publishing an image of the month, and an image of the year is a good exercise for me. It helps keep me accountable to be seeking or creating better images. I like getting the feedback on what other people think are good images, or are not.
I'm going to continue with the winner and two runner up images. One year I went with an honorary mention because it was taken so late in the year I hadn't had time to sit with it. I just went back and looked at it again and I'm pleased with that choice, but it won't happen this year.
I remain firmly convinced that one does not need to travel to the ends of the earth to get good photos. Yes, some of these really are from the other side of the world, but many are not just within Calgary city limits, they are within our own yard. Photographic beauty is where you find or create it.
Give me a beer and I could probably tell you a story about any of these. Here's a few, while I'm looking at them. Number 48 the bee, is probably the luckiest shot of the year. Getting a good photo of a bee perched on something is tough enough because they move so quickly, and they're so fuzzy it's easy to tell if you blow the focus. Plus whatever they're on is probably moving as well. It usually involves hundreds of rejected photos in any one session. Good thing I don't keep track of rejected photos. Catching them in flight is even more difficult. I don't normally get into camera settings, but this one is at 1/4,000 of a second, which is the fastest my camera can go, and there's still a bit of motion blur in the wings. An eye blink is about 1/10 of a second. Bees flap their wings at about 230 beats per second, or .00434 seconds per beat.
The New Zealand beaches are amazing. Every time I look at the photos I'm brought back to them, and remember what it was like to walk along them. Every time. I'd hoped to get the Southern aurora and while I couldn't see it with my eyes, the camera caught it. Yay! If it was legal I'd seriously consider becoming a New Zealand beach bum for my next career.
Oddly enough, although I took many photos of the white peony, not many of them ended up at the top of the list. I'm not sure why. Number 40, with the ant waving it's antenna and getting up the courage to cross to the next petal did it for me. I'm not normally a black and white shooter, but 42 was so striking, even better than the colour version.
The tulips though, they really put on a show. I was catching them in nice light, with water drops on them, and that makes for a great photo. 34 in particular could be printed big and put up on a wall to cheer up people in the middle of winter.
49, the lily took me a couple passes to notice.  Compared to others in the sequence it looked out of focus, and there was a splotch on the stem that looked terrible. Then I realized I could fix that and it would look more like a painting, which is one of the things I work on periodically.
There's all kinds of cloud drama in Alberta. I normally don't count cloudscapes in my 'best of' photo lists for a variety of reasons, but 46 and 47 are pretty spectacular. Still, I already know they won't be image of the year.
50 looks almost like a constructed image. Some might suspect photoshop trickery, or a double exposure, but I assure you, that is a single exposure, edited normally in Lightroom.
I'm down to 12 now, thinking about intentions. Often when I'm out with the camera I'm an opportunist. I go looking for something interesting, and I take a photo if I find it. There's an element of luck there, but there's work involved. The photographer has to think about where to go to find an interesting scene, actually get out there with the gear, with the skills to compose and capture the image.
But for many photographers there's more to it. They have an image in their brain, and they create the circumstances where they can capture that image. That could involve a model or models and everything they'll need to look right, the proper lighting, maybe some props, a fog or smoke machine, and who knows what else? If I think of which of my images come closest to capturing an intended image, that cuts it down considerably. Even so, it's still tough.
Second Runner Up
Feb 24 on Brighton Beach. I was trying to capture the reflection of the cloud in the water, then realized Linda was walking into it, then realized I might be able to get a walking on cloud shot. There was a bit of scurrying to get in exactly the right place, and compose for the faint footprints. As soon as I saw it on screen, I knew it would be image of the month for February, and would in the final running for image of the year. If nothing else had worked all year I'd have been happy to go with this one. 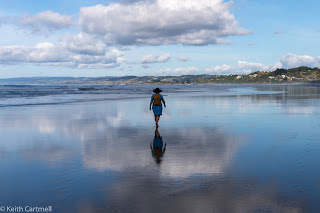 First Runner Up
October 23 at home. I'd looked out the window wondering if there was enough snow to make it worth going out to get snowy shots. At first I was looking past the reflections at the cone of lighted snow beneath the streetlights. Then I saw the reflection, and started thinking about how to capture it, wondering if I could get everything lined up, and maybe even get a nice tail light trail from a passing car. This is one where moving the camera even an inch, or tilting it up or down, radically changed the image. It's been growing on me more and more every time I look at it. 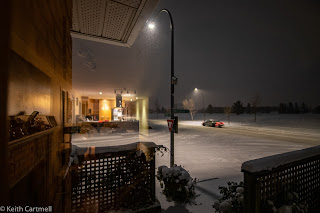 Image of 2020
May 13. Michelle and I worked together to plan a photoshoot in conjunction with Melanoma Awareness day. The idea was to get a shot of her with the yellow and blue lights on the tower behind her. That part didn't quite work out as well as we had hoped, but the many other wonderful shots more than made up for it.
The other shot we discussed was a quiet cancer survivor contemplation shot, letting the light of a candle be reflected in her eyes. It isn't a candle, but a string of LED lights and you have to look carefully to see it, but that's a trivial detail. It's the best example so far of having an idea for a portrait seen through to fruition.
Michelle says, I’m grateful that it mattered to you to take the time to mark the occasion with me. I love the result not only of that shot but of a number of photos that capture the “essence of me” that I have made my profile pics over the past decade! I love working with you! 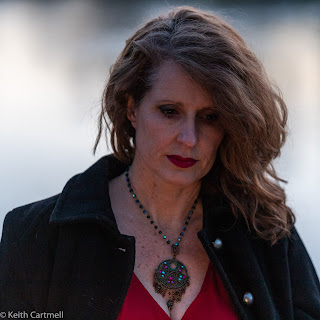